How do SNMP works? Here is a Detailed Explaination. 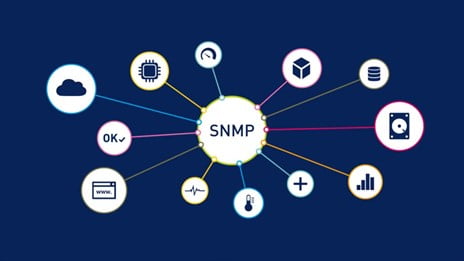 What is Simple Network Management Protocol ?

Simple Network Management Protocol (SNMP) is an application protocol that is used to manage the network devices on a public or private network, by using port numbers 161 & 162. The main perspective of SNMP is to provide network devices such as routers, servers, and printers with a common language for sharing information with a network management system (NMS).

What are the components of SNMP?

SNMP Agent – these are the software modules that are installed on network devices collecting data about disk space, bandwidth use, and other important network performance metrics. When queried by the SNMP manager, the agent sends the requested information back to the management system. Most of the devices come with SNMP pre-installed

MIB (Management information base) – MIB consists of all the information that is to be managed. This information is organized in a hierarchal manner. Each MIB item is assigned an object identifier (OID).

SNMP can perform a throng of functions, using a combination of push and pull communications between network devices and the management system. It can issue read or write commands, such as changing a configuration setting or resetting a password. It can also report back how much bandwidth, CPU and memory are in use, with some SNMP managers automatically sending the administrator an email or text message alert if a predefined threshold is exceeded.

Most of the time, the communication is initiated by the SNMP manager and the agent sending a response. These commands and messages are transported over User Datagram Protocol (UDP) Or Transmission Control Protocol/Internet Protocol (TCP/IP), known as protocol data units (PDUs):

Zindagi Technologies is an IT consultancy and professional services organization based out of New Delhi, India. We are experts in large-scale data center design and deployment, service provider network design, information security, blockchain, IoT, Smart Cities, and Private/Public/Hybrid cloud solutions. Each one of us has years of experience in large-scale network design, deployment, and automation. You can reach out to us on +91- 9773973971 or visit our website for more information.

What is CRYPTOGRAPHY? What are its Advantages vs Disadvantages?