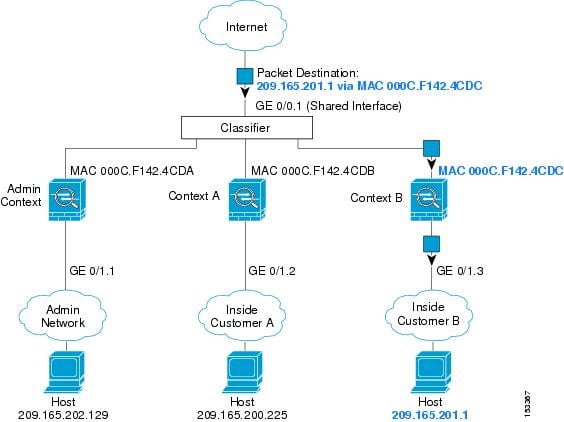 Network Security Engineer should provide security of communication and should be able to restrict access from insecure networks like the Internet. A Firewall is used for the restriction of any unwanted communication between any private and public networks.

Now when we are moving towards Cloud, there is a requirement of multi-tenancy where you want to provide a separate tenant and resources dedicated to individual customers. In order to achieve multi-tenancy in Firewall, ASA provides a feature called Context. Previously we explained the To and Through the Cisco ASA Firewall and today, we will be discussing what is Context and how it works in Cisco Firewall i.e. ASA for traffic belongs to the different customers.

What is Context in Cisco ASA?

Before understanding the concept of Context in ASA firewall, first, we need to understand Virtualization. Virtualization is the process of running a virtual instance of a computer system in a layer abstracted from the actual hardware like we create Virtual Machines on Hypervisor.

Note: When you change the mode of ASA, it requires a reboot.

To check the number of Context licenses in ASA, use the “show version” command. The below-mentioned output shows that the ASA has 2 licenses for contexts.

Types of Contexts in ASA Firewall?

There are 3 types of Contexts in the ASA Firewall. Following are the types.

– It is created by default. It cannot be modified or deleted.
– There can only be 1 SES context, not more than that.
– It does not participate in Control and Data plane.
– Whenever we take the console of the Multi-Context ASA, we always login to SES Context by default.
– From SES Context, we create another context and allocate physical resources to other contexts.
– Creation/deletion/suspension of all contexts are done on SES Context.
– Any Configuration done in the SES context gets saved in NVRAM.

Are you Planning to Deploy Cisco ASA Firewall for your Environment?

If you are planning for Deployment, Tech Refresh, Data Migration from your legacy Firewall or any Firewall to Cisco ASA, or for implementing advanced features in your already deployed ASA Firewall. You can always get in touch with the team at Zindagi Technologies.

Our team consists of experts in the field of Data Centre technologies, Network Security, Enterprise & Service Provider Networks, Virtualization, Private Cloud, Public Cloud, Data Center Networks (LAN and SAN), Surveillance, Wireless, Collaboration, Openstack, storage, ACI, and security technologies with over a 20 years of industry experience in planning, designing, implementing and optimizing complex Network Security and VPN deployments. We can help your organization grow by planning, deployment, and implementation of our services, give us a call at +91 9773973971 or you can also mail us.

How To Register Or Migrate CUCM/VCS Registered Endpoints To Webex

Why Using Managed Cloud Services Is The Best Option For Your Organization?