WHAT IS SPANNING TREE PROTOCOL AND HOW DOES IT WORK? 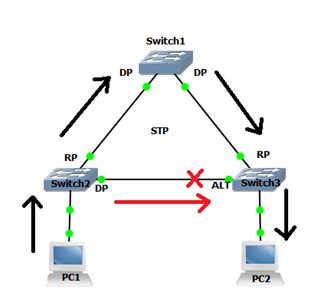 STP is a Layer 2 protocol that makes a loop-free network topology by blocking the redundant path.

STP elects the root bridge, and it will decide which port will be in forwarding and blocking state.

A switch that has the lowest bridge-id will become a root bridge.

Root Bridge always generates a hello message after every 2 seconds called BPDU. It is used to elect a root bridge. Two types of BPDU are Configuration BPDU and TCN BPDU.

Note: – In a segment one port is DP and the other non-DP.

What is meant by Root port and Designated port?

A port that receives superior BPDU will become a root port. There can be only a single root port on Non-Root Bridge.

A port that transmits superior BPDU will become DP.

How to identify Superior BPDU?

As the switch comes up, all switches start sending BPDU for the root bridge election. Switch which receives superior BPDU stops sending the BDPU message, but it relays the superior BPDU received at RP port from the DP port. Switch holds both superior and inferior BPDU for max-age time i.e., 20 seconds.

Here in the below diagram, SW1 is elected as Root Bridge as it has the lowest Bridge-ID. Root Bridge has all ports as Designated. Root bridge will decide which port will be forwarding and blocking state, thereby providing loop-free topology.

What are different STP states

Let us see for example how DP, RP, and Alternate Port are elected?

IEEE has a predefined cost: –

NOTE: – This cost is directly related to speed, if we decrease fast Ethernet speed to 10Mbps it will have cost 100. Root Bridge always generates zero cost BPDU and on the receiving BPDU, the cost is added.

In the next blog, we are going to explain what different topologies change and how STP convergence time can be minimized.

Zindagi Technologies is an IT consulting company having engineers with decades of experience in planning, designing, and implementing Data Centers along with Managed IT Services, cybersecurity, cloud services. If you want to secure your network, we are just a call away. Please ping us on +91-9773973971 or you can also email us.

A Brief Explanation Of How Switch Port Analyzer Works.