MPLS is one of the most demanding technology in networking that enhances the network to carry all kinds of traffic, ranging from IP unicast & multicast traffic to VoIP traffic to Layer 2 traffic in a single packet. It is majorly used in Internet Service Provider (ISP) networks than the enterprise network. This MPLS technology has reduced the ISP infrastructure cost to some extent.

As the blog proceeds, the following pointers will be covered:

MPLS stands for Multiprotocol Label Switching.It is a label-based switching protocol. The label is the information attached to a packet that tells every intermediate router to which egress edge router it must be forwarded. The “Multiprotocol” means an MPLS packet can support multiple protocols (i.e. all routing protocols, multicast traffic, IPX traffic, Appletalk traffic) and encapsulate them in a single type of packet. The “Label Switching” means that the data is forwarded from source to its destination using label rather than IP addresses. It is a Layer 2.5 protocol as the MPLS header gets encapsulated in between Layer 3 & Layer 2.

What are the Benefits of MPLS?

We will now learn about the benefits of running MPLS in our network and how can they help. The following are the benefits:

Speed: MPLS uses a label for switching the packet. It has been observed that switching IP packets on a CPU is slower than switching labeled packets. When switching IP packets, a router forwards IP traffic by looking up the destination IP address in the IP header and finds the best match in the routing table. Since the IP addresses have four octets, the search can be complex. A complex search means that a forwarding decision for an IP packet can take some time.

Although, looking up a single label value in the table rather than looking up the IP address in the routing table would be a faster way of switching the packets.

Optimal Traffic Flow: With MPLS VPN, we can create a directly peer-to-peer VPN tunnel from one site to multiple sites. Thus, the traffic flows directly/optimally between the sites. 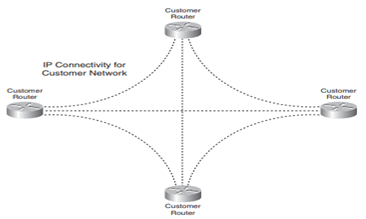 Note: For the traffic to flow optimally, all sites must be interconnected in a full mesh design.

BGP-Free Core:  MPLS forwards the traffic based on the label. MPLS enables a label to be associated with an egress router. The core or intermediate router does no need to have the information to forward the packets based on the destination IP address. Thus, the core router in the service provider network no longer needs to run BGP.

Traffic Engineering:  Traffic Engineering is one MPLS application that has its own role to optimally use the network infrastructure, including links that are underutilized. It is reliable and fully optimal utilization of resources which improves the traffic performance of the network.

There are some benefits of Traffic Engineering as below:

– Efficient use of all bandwidths.
– Ensure the desired path through the network.
– Handling unexpected congestion.
– Fast convergence around the network.

Quality-of-Service: MPLS support QoS. It provides an increase in the performance enhancements and service creation capabilities of the network.

How Will We Define MPLS Terminologies?

LSR: It stands for Label Switch Router. The router which uses a label to switch the packet in the MPLS network is called an LSR.

LER:  It stands for Label Edge Router. This type of router is deployed at the edge of the MPLS network connecting to the customer edge (CE) router. It is also called an ingress/egress LSR router.

LSP: It stands for Label Switch Path. In the MPLS domain, the path taken from ingress LSR to egress LSR is known as LSP.

LDP: It stands for Label Discovery Protocol. It is a discovery protocol that is used to discover MPLS neighbors in the MPLS domain. It is also responsible for assigning labels to the packet. It is a layer 7 protocol that uses both TCP and UDP at layer 4 with port no. 646.

PHP: It stands for Penultimate Hop Popping. It is a function of removing the outermost label tag from the MPLS packet by an LSR router before the packet is passed to an adjacent Label Edge Router.

PUSH: It is a process of imposing/encapsulating labels to the ingress packets that come from the Customer Edge (CE) router.

SWAP: When an intermediate LSR router receives a labeled packet from its adjacent router, it swaps the label by removing the top label and replaced with the new one.

POP: It is a process of disposing of the label from the packet.

Now to summarize we now know about MPLS, its benefits, and the terminologies used in MPLS. We have tried to be very clear in terms of understanding and we hope that you like this blog. We have a dedicated team of engineers at Zindagi Technologies who are trained in their respective domains and are currently performing well at their respective projects. Having a good knowledge about the domains and technologies and has been our forte.

We have been handling many projects in the private and public sector and giving services like Data Center Implementation, Managed IT Services, Security Services, Public Cloud Management, and a lot more. We hope, we are very much clear about the need for MPLS why MPLS technology is important in our networking. In the next blog, we will continue with the rest, such as MPLS traffic flow and the prerequisite to configure MPLS. You can reach out to us on +91 9773973971.

What is StackWise Virtual Technology?