Explaining PIM-Sparse Mode in Multicast and its different terminologies. 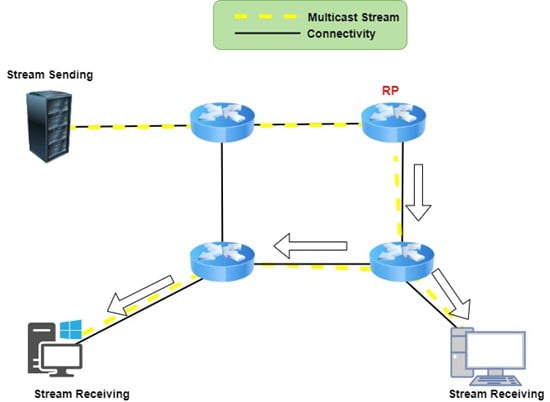 As we learn in the last blog Multicasts with PIM DM (Protocol Independent Dense Mode) in this blog we will learn why we need Sparse Mode in PIM. To understand this, we require PIM Dense mode disadvantages.

One of the big disadvantages of Multicast DM is, multicast stream sends (Flood) to all PIM enables routers whether they have required or not. To control this flooding PIM SM has come, in this blog, we will cover the below-mentioned topic-

PIM Sparse mode uses a shared tree to send the multicast traffic, it uses reverse path forwarding to create the path. It is very frequently used in current industries. The reason is, it controls flooding and unnecessary traffic utilization of the link. How it is working? To know this, we must know about Rendezvous Point (RP). Before learning RP, we will know the message types and another mechanism that is used in PIM Sparse mode.

Register Message- So basically register message use between the initiator of multicast stream router to RP (Rendezvous Point) router.

Rendezvous Point (RP) is use in PIM Sparse Mode. RP is the main reason to prevent the flooding of the stream, it is like a meeting point and all PIM routers meet on RP to join many multicast groups. There are two types to configure the RP-

From the packet flow perspective, the Video stream server will send the stream to their router which has PIM enabled.

Again, in all PIM-enabled routers, we will make (configure) one or more RP (R5) routers that are responsible to send a join message to the router (R1) which has initiated the multicast stream.

After the join message, RP will get the all-multicast stream and after that, if any user IGMP (Internet Group Management Protocol) reports for a multicast stream, on that time RP router will provide the same multicast group stream.

To sum up we can say PIM Sparse mode resolves the flooding of multicast on all PIM neighbors routers. The main role of this prevention is RP(Rendezvous Point). PIM sparse mode creates a shared tree and uses reverse path forwarding to share the multicast stream. For more configuration and implementation perspectives kindly reach us through our website or call on  +91 9773973971.

What Are The Prerequisites And Configuration Of Virtual Switching System?

Useful And Most Important Firewall Commands In Centos