Explaining the PIM-Dense Mode in Multicast and its Terminologies. 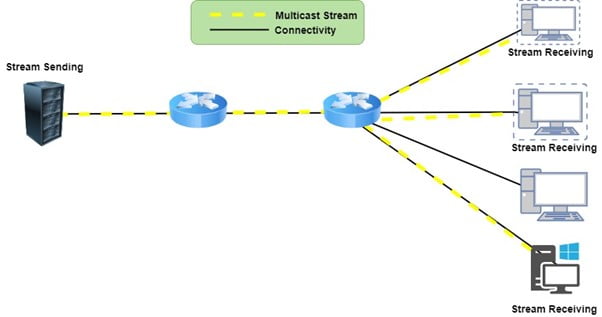 Multicast is the combination of Multi and Cast. Multi means more than one and cast means streaming data (Packets) from the Source to Destination. PIM stands for Protocol Independent Multicast; this is one of the types of multicasts. In this blog, we will understand the basics of Multicasting with PIM with (DM)Dense Mode, and cover the below-mentioned points-

For Sparse mode, Sparse-Dense mode, and best uses we will continue to learn in the next blog.

PIM (Protocol Independent Multicast)- PIM is the open standard Multicast Routing Protocol as mentioned in the name independent, showing there is not any specific dependency of the routing protocol to configure. This protocol works on Layer-3.

MOSPF (Multicast Open Shortest Path First)- With the name showing OSPF in this Multicast routing protocol there is a dependency of using OSPF, without using OSPF in the backend it will not configurable.

PIM is an open standard protocol, some of the terminologies are mentioned below.

Dense mode is the second type of PIM, which makes the source base tree it is flooding the traffic on all PIM enables routers link. In this mode, the routing table makes S, G (Source, Group) entry in the m-routing table.

Hello- Hello message used to discover the PIM neighbor. All routers who are part of the PIM multicast will send the hello message every 30 Sec on multicast IP 224.0.0.13.

Assert – Assert Message is sent only when a router has multiple LAN downstream links with the valid state, at that time duplicity can occur, to prevent is both* routers from sending the Assert message to elect for forwarding the packets.

IIL Interface (Ingoing Interface List)- This interface is the interface receiving the multicast.

PIM-DM uses a source base tree and for work on flood behaviour and every time make new S, G entry which is a problem. So unnecessary to send the traffic to all PIM neighbors. Mostly PIM-DM is not most commonly used due to some disadvantages. PIM-SM (Sparse Mode) is used commonly. For details in PIM Sparse mode kindly refer to the next blog. You can get in touch with us for the technology needs for your organization, you can WhatsApp us on +91 9773973971.

An Overview on Static Routing