How to achieve Gateway High Availability with HSRP, VRRP, and GLBP Protocols Part-2 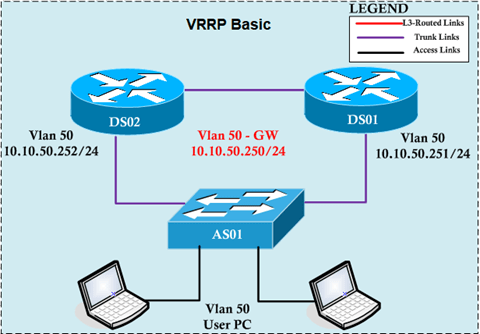 As we learned in the previous blog on How to achieve Gateway High Availability with HSRP, VRRP, and GLBP Protocols Part-1 basic of HSRP (Hot Standby Router Protocol). In this Part-2 blog, we will learn HSRP in advance and the basics of VRRP (Virtual Router Redundancy Protocol). Concept wise VRRP is very similar to HSRP. We will cover the below-mentioned topic-

HSRP version-2 packet format is different than the HSRP version-1. Find the format details below the image.

Track Configuration and apply on HSRP

Why do we need a track for HSRP? As we can see in the image below, HSRP runs on Both routers R1 & R2 interface Fa0/0. And if any Router’s interface fa0/0 down automatically changes the state from active to standby and standby router will change the state from standby to active. And with minor fluctuation, data will continue with any interruption. Switchover time we can change by manual, by default hold timer is 10 sec for both HSRP version-1 &2.

Just imagine what will happen when ISP (Internet Service Provider) connected link (Fa0/1) goes down, on that time still HSRP state will not change because on the down interface (ISP connected link Fa0/1), HSRP not running, so traffic will not be forwarded to ISP but still, HSRP will send the traffic to the active router. In this scenario, our redundant path is available to but in use, and our all traffic will drop.

To avoid this issue Track mechanism will come in a scenario. With the help of Track, we can monitor the ISP-connected link and apply the tracked object with HSRP and if a link will go down the track will also down and as per preconfigure the Priority decrement value will also decrease. After decrementing of priority automatically state will change from active to standby.

HSRP provides Gateway High Availability for LAN traffic. Due to cisco’s propriety many organizations not using this protocol because if they want to use anything other than Cisco vendor device is not supported. To resolve this vendor specific protocol issue one other Open standard protocol came into a scenario which is VRRP (Virtual Router Redundancy Protocol).

VRRP is an open standard protocol that can us to other than Cisco vendors like Juniper, Arista, Aruba, etc. Concept wise this protocol is similar to HSRP like it is also used to provide Gateway High Availability for LAN traffic.

VRRP uses multicast address 224.0.0.18 and protocol no 112 to communicate the information to the peer. It is a layer-3 redundancy protocol.

In this blog, we learn about the HSRP version-2, some advanced features, and basic terminology and configuration of VRRP. VRRP is most popular because this is an open standard protocol and can use by different vendors as well. In the next blog, we will learn about the GLBP (Gateway Load Balancing Protocol) which is also working on load balance between gateways. For more details about understanding, configuration, and implementation of these types of protocols kindly reach us or call us on +91 9773973971.

A Brief Explanation Of IP Header

Let’s Know About The Different Deployment Models Of Cisco Jabber?