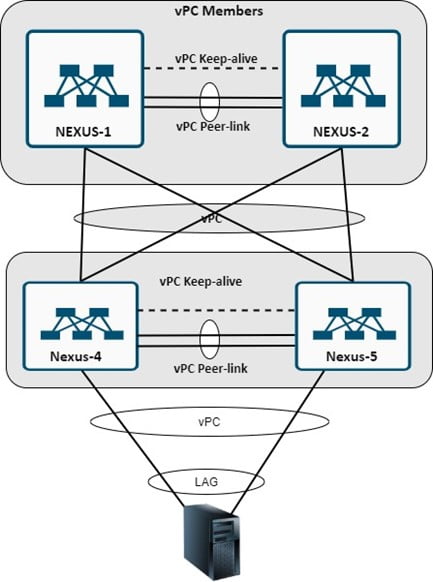 vPC (Virtual Port Channel) is the Cisco Proprietary feature that is only working on Cisco Nexus Components. vPC use to make Nexus devices logically single devices for the end host or devices. vPC is also known as Multi-chassis EtherChannel (MEC). vPC configured Nexus switch logically single for end-host/servers to traffic will be sent active-active from both cable to Nexus switches. In this blog, we will understand the basic concept of vPC in Nexus switches and cover the below points-

Prerequisites and Connectivity for vPC

To configure the vPC, we need to know what type of devices are supported vPC, basic connectivity between devices. As we know this is Cisco proprietary to for support points of view only Cisco devices will support this feature. This feature support only on Cisco Nexus, not in Cisco Catalyst switches or campus switches. All Nexus Models (types) switches support vPC. Minimum and Maximum two Nexus devices required to configure the vPC, both devices will be the member of same vPC domain.

There are two types of deployment methods of vPC in a Data Centre.

Single Side vPC use between Access switch to end device like blade servers, L2 Switch, LB, etc. The end device should support any bundle mechanism like LACP Active, LACP Passive, or Static bundling mode ON.

Double side vPC can use between Core to Distribution switches or Distribution to Access layer parent switches. The main difference is that both vPC domain IDs will be different. Mostly double side vPC use in all Data Centre because of it prevents the STP loop and forward the traffic from both ports.

As vPC (Virtual Port Channel) this is used to configure two nexus switches logically single for the end device. Some of the keywords we have used as shown in topology, we will know in detail about vPC members, vPC Peer-Keepalive, vPC peer-link, and other concepts.

vPC Member- vPC member use to which switch has participated the single vPC domain. As shown in the image Nexus-1 and Nexus-2 will be the same part of the vPC domain. If Nexus-1 is elected role as Primary and Nexus-2 is elected as Secondary, it is known as vPC Primary member and vPC Secondary member.

vPC Peer-Keepalive- vPC Peer-keepalive is a routed (Layer-3) link between both peer switches (Nexus-1 & Nexus-2). The purpose of this link is to check the liveness of peer switch. This link will be a segregated link from the others or subnet, it can be in different vrf. There are two use cases, first method uses by default the OOB (Out-of-band) IP to establish the vPC peer-Keepalive as this will be in management vrf. In the second method, we can create the dedicated vrf and assign the port with IP in this vrf.

vPC Peer-link- vPC Peer-link is the layer-2 trunk link and this link is used for synchronizing the vPC peer device. This link must be the 10-Gig link and both peer module and port capability must be the same. Whenever any PC member learns any PC or VMs MAC (Media Access Control) address use this peer-link to inform the peer member.

With this blog, we understand the basic concept of vPC, as this is a different type of Port-channel which is used to make two different switches logically single for the end-host perspective.

In the next blog, we will cover Configuration of vPC, Limitation of domain id, Role Priority/Role selection, Delay restore, Auto-recovery, peer-switch, Peer-gateway, orphan port, and many more.

For Data Centre environment technology like vPC in a traditional network or VXLAN, vPC technology implementation, and design you can get in touch with us or call us on +91 9773973971.

IT Provider Not Meeting Requirements? Time to Switch.