Understanding the Boot Process of CentOS/RHEL 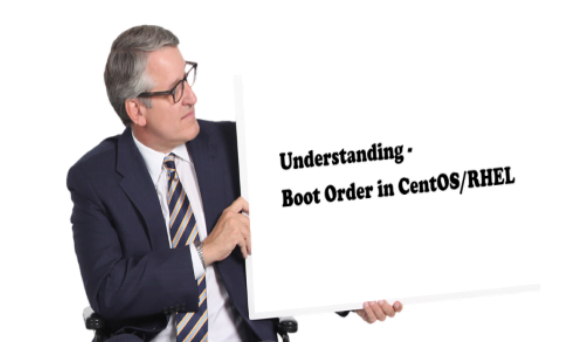 Do you know how CentOS/RHEL boots their operating system? If yes, it is very good but if not, it is sad news, because if you are Linux Administrator and you don’t have knowledge about how to operate the system boot you might lack behind in many ways.

Well don’t worry, we have got you covered.

Note – if changes are made to any of these parameters, you need to run grub2-mkconfig to re-generate the /bootgrub2/grub.cfg

After going to the boot process, you must have knowledge about systemd services.

Basically, it is the most important service manager in CentOS/RHEL operating system. It is used to enable, disable, start, and stop the services in Linux. If you need more detail about systemd services, we have already written a detailed blog on it – “What are Systemd (daemon) services”. It is backward compatible with SysV init. scripts used by the previous version of RHEL Linux including version 6.

1st Command – systemctl poweroff will stop all running services. Unmount all file systems only when they cannot be unmounted and then power down the system.

2nd Command – systemctl reboot will all running services, unmount the system, but unlike their power off equivalent.

The following steps summarize how the Boot procedure happens on Linux –

The machine is powered on. From the system firmware, which can be the modern Universal Extended Firmware Interface (UEFI) or the classical Basic Input Output System (BIOS), the Power-On-Self-Test (POST) is executed, and the hardware that is required to start the system is initialized.

From the bootable devices, a boot loader is located. On RHEL, this is usually GRUB2.

The boot loader may present a boot menu to the user or can be configured to automatically start a default operating system. To load Linux, the Kernel is loaded together with the initramfs containing kernel modules for all hardware that is required to boot the initial script required to proceed to the next stage of booting. On RHEL or CentOS, the initramfs contain a complete operational system (which may be used for troubleshooting purposes).

Once the kernel is loaded into memory, the first process is loaded, but still from the initramfs. This is the /sbin/init process, which on RHEL is linked to Systemd. The udev daemon is loaded as well to take care of further hardware initialization. All this is still happening from the initramfs image.

The Systemd process executes all units from the initrd.target, which prepares a minimal operating environment, where the root file system on disk is mounted on the /sysroot directory. At this point, enough is loaded to pass to the system installation that was written on the hard drive.

The system switches to the root file system that is on disk and at this point can load the Systemd process from disk as well.

Systemd looks for the default target to execute and runs all its units. In this process, a login screen is presented, and the user can authenticate. Note that the login prompt can be prompted before all Systemd unit files have been loaded successfully. So, seeing a login prompt does not necessarily mean that your server is fully operational yet.